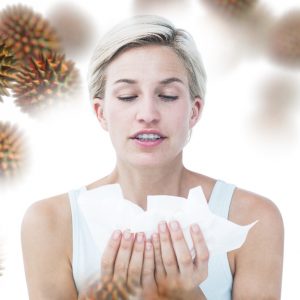 If you are considering having a Kenalog™ Injection for Hay Fever, we recommend that you read the following information. This will help you to be fully prepared and know what questions to ask. Kenalog™ is a Prescription Only Medication (POM), and your initial consultation should be performed face to face with a prescribing practitioner registered with a professional body. You should be offered a cooling off period to allow you time to consider the treatment and make an informed decision whether to proceed.

What is Hay Fever?

Approximately 10-15% of the population suffer from seasonal rhinitis, otherwise known as hay fever or pollen allergy. It is caused by an allergic reaction to pollen, typically when it comes into contact with your eyes, nose, mouth and throat. Although pollen itself is harmless, in hay fever sufferers, it is the body’s immune system that overreacts to the allergen and can cause the following symptoms:

Pollen is a fine powder that is produced by plants, trees, grass and weeds during the Spring and Summer months. Hay fever is usually worst between March and September and can be especially bad when it is warm, humid, and windy. The hay fever season also seems to be getting longer; this is likely due to changes in temperature, weather conditions and increased immune sensitivity in people.

When booking an appointment, ensure your initial consultation will be with a prescribing practitioner.

How is hay fever treated?

Hay fever can be treated by using methods to limit pollen exposure, over the counter treatments or by using prescription medication. Although there are many treatments available, there is currently no cure for hay fever and the symptoms may last for several weeks or months.

Over the counter treatments

Antihistamines: These medications block the action of histamine, which is released by the body when it detects something harmful, or pollen in the case of hay fever. There are many different types and are classed as either drowsy, such as Piriton® (chlorphenamine), or non-drowsy, such as loratadine, cetirizine or fexofenadine. They come in various forms such as tablets, liquids, nasal sprays, or eye-drops. Side-effects can include drowsiness, headache, dry mouth, and nausea.

Steroid nasal sprays: Steroid nasal sprays contain man-made hormones which act in the body to reduce inflammation and swelling. They work on the lining of the nose and reduce symptoms such as sneezing and blocked nose. They can cause some side-effects including dryness, stinging, nosebleeds, or taste disturbance. Some are available over the counter, and some are prescription only.

Eye-drops: If eye symptoms are the main feature, using topical antihistamine eye drops may control the problem. These are also available over the counter or on prescription.

Approximately 10% of hay fever sufferers will not obtain relief by simply using over the counter treatments.

A pharmacist or your GP can advise on treatments, including prescription only antihistamines, nasal sprays, and eye drops. If these fail to control symptoms, you may be referred to a specialist to consider immunotherapy where small amounts of pollen are either injected or taken by tablet to slowly build up your resistance.

If these measures are ineffective, an injection of Kenalog™ may provide relief from hay fever symptoms.

We do not recommend that treatments are performed in a non-clinical environment.

What are Kenalog™ injections?

Kenalog™, also known as triamcinolone, is a synthetic corticosteroid which is a hormone that works within the body to reduce inflammatory responses. It is widely used in medicine for the treatment of certain breathing conditions, arthritis, endocrine diseases, kidney problems, allergies, skin diseases, and some blood disorders. Steroids are one of the most powerful anti-inflammatory medicines that work by suppressing your body’s immune response and ultimately reducing symptoms.

Kenalog™ is administered as an intra-muscular injection into the top of the buttock. Unlike other intra-muscular injections, it is not advisable to inject this into the top of the arm. After injection, the drug is slowly released into the body over several weeks and generally provides relief of symptoms for 3 to 8 weeks. A single vial of Kenalog™ (40 milligrams) is used to treat hay fever in adults, although in rare circumstances, the dosage can be increased if symptoms are not controlled. Due to the longer-term risks of Kenalog™ affecting the body’s own steroid production, it is not recommended to have more than 3 treatments in a year.

Kenalog™ is not a first line treatment for hay fever and must only be considered when symptoms are severe and not controlled by other methods, including limiting pollen exposure and medications, or if other methods produce intolerable side-effects. Over the counter or prescription medication may still be required for symptom control even after receiving a Kenalog™ injection.

When booking an appointment, ensure your initial consultation will be with a prescribing practitioner.

Kenalog™ is injected using a fine needle, into the muscle at the top outer part of the buttock. As with any injection, it can sting and cause a slight burning sensation when it is administered. It can also cause some discomfort and throbbing in the area for a few hours or days afterwards.

If the injection is very painful, you should inform your treating practitioner.

As with any injection, there may be some redness, tenderness, and a small lump at the injection site. This will usually resolve within 24 hours. As steroid injections suppress your body’s natural immune response, you should make your healthcare provider aware if you are having any vaccinations. As a rule, it is not advisable to have a Kenalog™ injection either 2 weeks before or until 3 weeks after a vaccine. It is also important that you avoid people who have chickenpox or shingles if you have not had chickenpox previously.

All medicines can cause side-effects and Kenalog™ is no exception, although most people will have mild or no effects.

If you develop any unexpected side-effects after treatment, it is important to contact your practitioner as soon as possible, who may be able to offer advice or corrective treatment.

Rarely, adverse effects can be serious and include:

Signs and symptoms of a serious allergy may include a rash, wheezing, difficulty in breathing, tight chest or throat, trouble speaking and swelling of the mouth, face, lips, tongue and/or throat. If you experience any of these, you must ring 999 immediately.

What does the procedure involve?

Prior to treatment, you should complete a medical history with your practitioner, you should also receive all the relevant information you need to make an informed decision about whether to go ahead with treatment or not, as well as possible side-effects specific to your treatment and costs involved. It is usual to have an initial consultation and then rebook treatment for a later date, giving you the opportunity to have a cooling off period to consider all the information provided. Before treatment, you should be given the opportunity to have any further questions answered and sign a consent form, either printed or electronically produced.

Do not feel pressurised or coerced into having treatment at the same time as your consultation.

The area for injection will most likely be the upper outer aspect of one of your buttocks and is a deep injection into the muscle. The area will be inspected to find the best place for injection. Some practitioners may disinfect the skin prior to injection, but this is not a requirement. The skin will be gently pinched prior to treatment and the actual injection can cause a stinging or burning sensation that can vary in intensity. Some people find that it is quite painful, whereas most just experience a mild stinging. The actual injection will last for a few seconds only.

Following the procedure, your skin may be cleaned again, or gentle pressure applied if there has been some bleeding at the site. You may be asked to remain for 15 minutes after your injection to allow time for you to recover and for the practitioner to ensure that you do not have a reaction to the injection.

Your practitioner will record the batch number, expiry, and site of injection on your treatment record and will provide you with appropriate verbal and/or written aftercare.

If you have never previously had a Kenalog ™ injection, it is important to allow 15 minutes for observation after the treatment.

Am I suitable for treatment?

You may not be suitable for treatment if any of the following apply:

Side effects and risks increase with age, and it is important to consider the risks versus the benefits before deciding whether a Kenalog™ injection is suitable for you.

It is important to be honest about your medical history, and any medication taken, so that you can have a safe and effective treatment.

After treatment, most people can resume their normal daily activities. Immediately after treatment, there may be some discomfort, redness, and minor swelling at the injection site, which should settle in time. If you develop any bruising, which may be apparent at the time of treatment, it is usually minor and settles within a few days. Occasionally, more significant bruising can occur. Rarely, you may develop a headache after treatment which can last a few days. Simple analgesia can be taken for this if needed.

It is recommended that you do not aggravate the injection site and keep it clean and dry for 24 hours. The benefits of Kenalog™ are generally noticed 24 hours after the injection, however it can take a few days for the full effects. The injection can be repeated after 4 weeks if the symptoms return, but it is not recommended to have more than 3 injections in a 12-month period. You may continue to use other hay fever treatments, such as antihistamine tablets, eye drops and nasal sprays.

You must contact your treating practitioner if you suffer from any reaction that was not expected.

Ensure you know the following information:

Practitioners should be registered with a professional body (General Medical Council, General Dental Council, Nursing and Midwifery Council, General Pharmaceutical Council or Health and Care Professions Council) and you can check their current registration status online. Practitioners are accountable to these bodies and are legally required to have indemnity insurance in place for all the treatments they perform.

The ACE Group World patient leaflets have been produced to give you some ideas of what the treatment involves, possible side effects, what you should expect and what you should ask.

Purchase Patient Information Leaflets to use in your own practice.