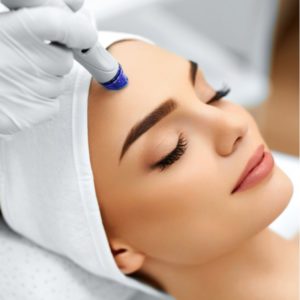 If you are planning on having a microdermabrasion treatment, we recommend that you read the following information so that you are properly prepared, can ask appropriate questions and know what to expect from your practitioner or therapist.

Microdermabrasion is an advanced exfoliating procedure which removes the dead, outer layer of skin cells and stimulates the underlying layers, which helps promote the production of new collagen and elastin.

Crystal microdermabrasion involves a device which blasts micro-crystals at high speed over the surface of the skin through a small tube. The crystals are then immediately vacuumed back up into a disposable cannister. These small crystals physically disrupt the outer layer of skin cells, causing them to be shed and vacuumed up along with the used crystals. Different machines often use different crystals which can include sodium chloride, aluminium salts, or sodium bicarbonate and some of the medical devices use crystals of a specific shape and size to obtain optimum results. Certain variables, such as vacuum power, pressure and speed may be able to be adjusted according to skin type and can affect the comfort levels during treatment.

There are also crystal-free, diamond-tip microdermabrasion machines available which use tiny diamonds on a rotating or vibrating tip to physically abrade the skin. These devices often also have a vacuum attached to remove the dead skin cells and exfoliated particles during the procedure.

Both methods can obtain similar results and during a treatment, the tip is moved over the skin in several passes. Some prefer crystal-free treatments as there are no residual crystals left on the skin or stray crystals that can enter the eye or be inhaled, but with a skilled practitioner or therapist, the risk of this is minimal. As a simple analogy, crystal microdermabrasion is like sandblasting the skin and diamond-tip microdermabrasion akin to using sandpaper on the skin.

During your consultation, ask which microdermabrasion device will be used.

Microdermabrasion was first discovered in the USA and quickly became popular due to being a non-invasive, painless, and safe procedure which quickly and subtly improves the appearance and texture of the skin. Microdermabrasion often features in the top 5 most popular non-surgical treatments in the UK.

What areas can be treated?

Microdermabrasion is most frequently performed on the face, but it can be used almost anywhere. As well as the face, the neck, décolletage, and hands are also popular treatment areas.

Microdermabrasion is particularly popular for the following indications:

How does it work?

The action of high-speed micro-crystals blasted onto the skin or diamond tip microdermabrasion results in the removal of the outer layer of dead skin cells (the stratum corneum) revealing younger, fresher skin beneath. The physical action of the treatment also stimulates skin cells (fibroblasts) to produce collagen and elastin.

By removing the top layer of dead skin cells, the skin appears more radiant with a smoother texture and once collagen levels are increased, the skin becomes firmer and fine lines and wrinkles may start to fade and disappear. Often a course of treatments, every 1 -2 weeks, is recommend to obtain the best results.

Microdermabrasion treatments are usually painless, and many people find the procedure relaxing. If you have particularly sensitive skin, you may experience some tingling or mild discomfort. If you experience too much discomfort during the microdermabrasion session, inform your treating practitioner or therapist as they may be able to alter the machine settings to make it more tolerable.

Immediately after treatment, the skin might be a little red and warm and feel tight, but this usually settles quickly.

The procedure is non-invasive and considered very safe. Dead skin cells and used crystals (if using a crystal microdermabrasion device) are vacuumed away into a separate filtered chamber, and then disposed of to prevent the risk of any cross-contamination.

When micro-crystals are being used, it is recommended to use eye protection and you may be asked to wear eye shields or goggles. Some practitioners and therapists may use some cotton wool or gauze in your ears to prevent any stray crystals from entering the ear canals.

Microdermabrasion should not be used in any areas where the skin is infected or inflamed or areas where a cold sore is present, as this may lead to a worsening effect or spreading of infection.

We recommend that treatments are only performed in a suitable medical or salon setting.

Generally, side-effects are uncommon, often mild, and usually resolve within a few days after treatment:

If you develop any unexpected side-effect after treatment, it is important to contact your practitioner or therapist for a review as they may be able to offer some corrective treatment.

What does the procedure involve?

Prior to your treatment you should be given a full consultation, complete a medical questionnaire and be allowed a cooling off period to enable you to make an informed decision with full disclosure of the possible risks and side effects specific to you. You should also be given an indication of the cost of the treatment. Before you receive any treatment, you will be required to sign a consent form, this may be on paper or electronic, and be given the opportunity to ask any further questions. Photographs should be taken and kept as part of your medical record. These should not be used for any other purpose without your explicit permission.

Do not feel pressurised or coerced into having treatment at the same time.

Before your microdermabrasion, the area will be cleansed and disinfected. Eye protection, if required, will be provided. The device settings are then adjusted, and the microdermabrasion tip is applied to the skin and passed over the skin in smooth, stroking movements. You may feel the skin being ‘dragged’ a little, but this should not be an unpleasant sensation. The whole area will be systematically treated in specific areas and several passes may be applied. Several settings may be varied, and the intensity may be reduced for certain areas (e.g. the under-eye area). Treatment time is generally between 20 – 40 minutes.

Following the procedure, your practitioner or therapist will often apply a moisturiser or other serum as well as a good sun protectant to protect your skin as the skin’s natural barrier has been compromised.

After treatment, the skin can feel much cleaner, fresher, and firmer. It is usual to get a slightly reddened complexion immediately after treatment.

Am I suitable for treatment?

As microdermabrasion is non-invasive and a superficial treatment, most people are suitable for treatment. It is not appropriate for the treatment of medium to deep lines and wrinkles, pigmentation or broken capillaries. There are often more suitable procedures for these problems, and these should be discussed with your treating practitioner or therapist.

You may not be suitable for treatment if any of the following apply:

It is important to be honest about your medical history, previous procedures, skin care products used and any medication taken so that you can have a safe and effective treatment.

Microdermabrasion is an ideal procedure to have to complement other treatments, as once the dead layers of skin are removed, it allows greater penetration of light-based treatments, skin peels and skin care products.

Ensure you know the following information:

Practitioners and therapist are legally required to have indemnity insurance in place for all the treatments they perform, and you can ask for them to provide evidence of this prior to commencing any procedure.

The ACE Group World patient leaflets have been produced to give you some ideas of what the treatment involves, possible side effects, what you should expect and what you should ask.

Purchase Patient Information Leaflets to use in your own practice.